The Importance of Being Lady Lucy 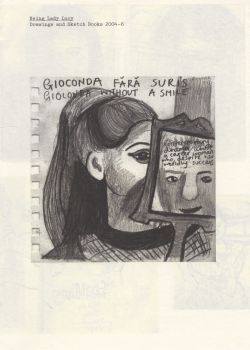 Excerpt from The Importance Of Being Lady Lucy written by Eddie Chambers
The text was published in the catalogue for the solo show Being Lady Lucy, Drawings and Sketchbooks at Unit 2 Gallery

There is something that is almost primeval about Lady Lucyï¿½s drawings. Though she is a highly skilled and highly trained artist, her sketches might at first appear to be the product of an untrained hand and an untutored mind. Almost as if they are latter-day versions of early cave paintings. She cares little (indeed, she cares not at all) for the niceties and conventions of scale, perspective and other dictates that we might associate with the well-drawn image. There is nothing correct about her drawings. Instead, they embody what might at first appear to be a roughness and a crudeness that emphasizes the urgency of her need to draw. Her need to get down on paper that which puzzles, intrigues, charms, or interests her, leads to the creation of images that, in a multiplicity of ways, speak of and to the mixed upness, the bizarreness, the complexity, of modern life. I do of course use words such as roughness and crudeness advisedly. Lady Lucyï¿½s drawings are after all sophisticated multi-layered and highly skillful renderings that succeed in obliging us to consider all manner of relationships and engagement that we might have with each other and with the world around us.

This exhibition features Lady Lucyï¿½s acclaimed body of work, produced 2005-6, based on an obscure publication that she found in some or other charity shop. The World Filmography 1968 is a fascinating comprehensive guide to the thousands of feature films released around the world during that year. Using its assorted entries, Lady Lucy has produced a cacophony of imaginative, witty and thoroughly engaging drawings. Individually and collectively, these drawings tell us much about the human condition of people throughout the world in this most turbulent and seismic of years. Not from the problematic point of view of ï¿½factï¿½, or of supposedly objective observation, but from the infinitely richer and more textured perspective of the story-maker. Looking at and engaging with this series of work, we get an uncommon and truly wonderful sense of the human experience and the human potential, to oscillating degrees. Mystery, intrigue, suspense, comedy, pathos, almost as many varieties of relationships as we can comprehend, the triumph over adversity. Within Book of Books, all human life is well and truly here. And in considering the artistï¿½s rendering of all human life, this work prompts us to reexamine and reconsider our own personal stories and histories, in the context of an endless assortment of other peopleï¿½s stories, both real and imagined, released to the world in 1968. 1968! The year in which student and worker revolts almost toppled the French government of Charles de Gaulle, US troops massacred civilians in Vietnamese My Lai, Reverend Dr. Martin Luther King Jr. was assassinated, Robert Kennedy too was assassinated, and of course Jacqui Kennedy married Aristotle Onassis. 1968. The year of Hey Jude, Mrs. Robinson, All Along the Watchtower, Born to Be Wild, Hello I Love You, and Sittin’ on The Dock of the Bay. A definitive year. An intriguing year, made all the more so by Lady Lucyï¿½s extraordinary document.

Lady Lucy’s drawings, together with the text that sometimes accompanies them, tell of a thousand and one conversations held, poignant or significant snippets of which have been committed to the pages of the artist’s sketchbooks, or on larger (or indeed, smaller) pieces of paper. At a time when process is often disparaged or set aside in favour of other ways of working, Lady Lucy’s practice represents a fresh and bold body of work that is, nevertheless (and perhaps surprisingly) very contemporary in its explorations of history, identity and culture. Drawing is, it seems, essential to her very life, existence and creativity. As she herself declares, Drawing has become an essential ritual in my existence. It is rare indeed for an artist to openly declare such vulnerability and that it is this need to draw that lies behind the creating of such extraordinary bodies of work. We have much to thank Her Ladyship for.

The full version of the above text was published in the brochure to accompany the exhibition ‘Being Lady Lucy. Drawings and Sketchbooks 2004- 2006 by Lady Lucy. The exhibition was at Unit 2 Gallery, London, January 20 – March 10, 2007.

Comments are closed, but trackbacks and pingbacks are open.